Whatever she wears, she's still going to be short

After a long weekend of baseball-watching, I’ve just touched base with the Cosmic Forces of Baseball, and they’ve informed me they don’t buy into the concept of the Yankees winning the American League’s Eastern Division by virtue of having won the season series against the Red Sox. The Cosmic Forces of Baseball say that sounds like an NFL rule, along the lines of the Two-Minute “Warning”.

But because there’s no baseball to be played on Monday, that frees the 19 Minutes household to go back to its other October hobby – namely, trying to find a Halloween costume for my 15-month old daughter.

She was a strawberry last year, thanks to a sweater and hat ensemble that, well, looked like a strawberry. Of course, she was 3 1/2 months old last Halloween, which meant that dressing her up was mainly for the benefit of her parents and the people on her photo e-mail update list. 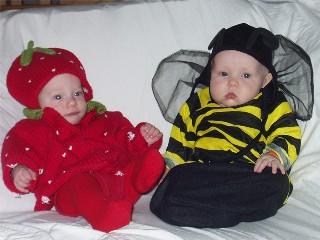 Sylvi and her friend Phoebe (who was dressed as a bumble bee) sat on the couch, looking dubious, while their various parents scrambled around trying to get the ultimate picture, which of course was impossible, since aside from wearing the costumes, there wasn’t much more the girls could do to look like either a strawberry or a bumble bee. Also, since neither girl was eating much solid food at the time, her parents were forced to eat all the Halloween candy. Though my wife and I were tempted to add a pureed Bit-O-Honey to Sylvi’s rice cereal.

So this year is a little different. Not only is Sylvi eating solid food (she’d probably pass on the Bit-O-Honey itself but consume the wrapper with the utmost haste), but now she’s ambulatory. So whatever costume she ultimately wears, it’ll have to include a bottom half.

Even so, the costume will still mainly be for the benefit of friends and relatives. Sylvi’s walking, but at 2’4”, her strides are a little too short to cover much ground on Halloween night. Even if she walked really fast – she’s 15 months old, and we probably wouldn’t even make it to one house for trick-or-treating before she was distracted by a really interesting piece of gravel by the curb, where we’d spend the rest of the evening.

AND even if she didn’t get distracted by gravel, we’d get to the first house, ring the doorbell, the homeowner would answer it, and Sylvi would say: “Abbb.” If she said anything.

Actually, she does have a few select words and phrases that the trained Sylvi Listener can understand, which have given us our few concepts for this year’s Halloween costume:

She clearly says “Baaa.” (Yes, the opposite of “Abbb”.) As in, “What does a sheep say, Sylvi?” “Baaa.” She also knows how to wave on demand, which leads to the even cuter, “How does a sheep say ‘goodbye’, Sylvi?” “Baaa.” [wave]. So we’re looking for a sheep costume for the full Tiny Sheep Effect. Unfortunately, most of these seem to run in the $40 range, which seems like a lot of money for an outfit that will get, at most, one wearing. On the other hand, it’ll be good preparation for the bridesmaid dresses she’ll have to buy in 20 years.

She also says “bird”, “ball”, and “bear”. Unfortunately, these also sound like “Baaa”, so she could be dressed as an ornithologist, but people would still think she sounds like a tiny sheep.

Somewhat less clearly, she says “breakfast.” That’s led us to some less-conventional costume ideas, such as “Short Order Cook at Denny’s” (her cooking skills are meager, but she is short), “Bowl of Hash Browns”, or “Half-eaten Pop Tart”, but neither my wife nor I is creative enough to pull any of these off.

We’ve though about painting a goatee on her face, dressing her in an old baseball cap, college sweatshirt and jeans – in other words, a “Dad” costume, but we haven’t yet set up a savings account for her future psychological care. Which is a shame, because she says “Daddy” pretty clearly.

So that leaves us with only one other option – at 15-months, Sylvi is learning to whine with great proficiency. So we might just have her dress up as a New York Yankee.
Posted by Mitch Teich around 1:14 AM

You should take advantage of your current ability to dress Sylvi as whatever you want her to be. She may be one of those kids who loves dress-up and does it every possible day, or she may be a kid like Max. For his third Halloween, the only costume I could get on him was a 6-inch Elmo face (flat, just felt) safety-pinned onto the BACK of his shirt, so he wouldn't know it was there.