I had the public television show “Globe Trekker” on TV in the 19 Minutes World Media Headquarters last night. This morning, actually. Our local public TV outlet is considerate enough to run Globe Trekker at midnight Monday morning, after any number of 30-year old droll British sitcoms. (In fairness, they show it at 8 p.m. Sundays, too, but this is also inconvenient, coming as it does right around the time we’re due to watch the fine Sesame Street feature “Monster Hits”.)

It’s a travel show co-produced by the people at Pilot Guides, and it has a slightly edgy, slightly irreverent, but largely respectful style, and a spiffy world beat soundtrack. Basically, it’s a show for those of use who eschew the package tours and seek out the public markets as much as the art museums. It’s closer to the Hitchhiker’s Guide to the Galaxy than it is to Rick Steves.

All of the traveler/hosts are engaging, but last night’s host, Megan McCormick, is especially good at conveying what many of us experience when we’re in a strange place – basically, experiencing a situation so foreign that we have no idea what to say.

Last night’s episode had McCormick in Beijing for a week, which included a trip to a street market at which she was confronted with the concept of roasted scorpions. Given the opportunity to try them, she bit into one and – in expert fashion – made no attempt to act as though she was enjoying it at all. (“Crunchy,” was her review.)

It does raise the question of how bad things must have gotten at some point – how hungry must someone have been, to have decided that scorpions would make for an appetizer. I mean, maybe after you’ve been stung a few times, the concept of revenge would sound good, but you could just as easily accomplish that by jumping up and down on one. Or hitting it with a large rock. Or the Oxford English Dictionary, if you could find one in Beijing.

But then I look at the opposite extreme – the mini donuts at the County Fair, the Twix Bars in the basket in a colleague’s office, Alpha-Bits cereal – and I consider that at least the ingredient list on a roasted scorpion is understandable. (“Scorpions,” I believe it reads.)

I’ve never actually encountered anything quite so different (okay, I was going to write "bizarre", but I thought that might seem xenophobic) as roasted scorpions on any of my travels. But on my most recent trip abroad – to Finland, Estonia, Sweden and Denmark - my goal (aside from acquiring a Finnish hockey jersey) was to consume as many unusual foodstuffs as possible.

This wasn’t always easy, as the Finns seemed to like their pizza as much as most Americans (though my wife and I did watch a Finnish couple eat an entire pizza without touching the outer crust. They ate the entire inside until they were left with a 14-inch ring of dough.).

But we started our trip with a quick flight from Copenhagen to Stockholm, which featured a lunch that exposed us to the ubiquitous roe which shows up in much of Scandinavia the way ketchup packets accompany American meals, even in unlikley situations like ham-and-cheese sandwiches. This was followed by a ferry from Stockholm to Helsinki, which gave us an opportunity to order up some reindeer for dinner. Unfortunately, I was too exhausted from 36 hours of traveling to give a comprehensive review. “Edible,” was about all I can remember.

Fortunately, we caught up on our sleep on the rest of the ferry ride, which meant I have a clear memory of several other dishes:

Beaver, shredded and eaten in a salad at Peppersack, a mideval restaurant in Tallinn, Estonia. My review: Kinda jerky-like. My wife’s review: Wet rodent. She didn’t finish hers. 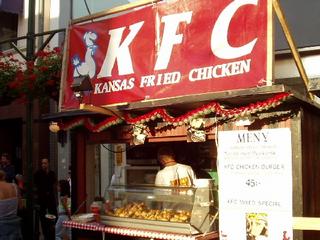 Wild boar, eaten at a street festival in Malmö, Sweden. It tasted like pork. In fact, I’m not absolutely convinced it was “wild” boar at all. After all, it was purchased from a stand next to another vendor advertising “Kansas Fried Chicken”.

But in all, none of these foods ranked quite as frightening as roasted scorpions. Or Alpha-Bits.
Posted by Mitch Teich around 2:23 AM