Just enough time for something weird

It's been busy busy busy here in the 19 Minutes World Media Headquarters. Ironically (given our earlier post on elk and heating costs), we produced an hour-long program on global climate change last night, which is archived here, and also in podcast form here.

Then, with only a brief night's sleep to shift gears, we immediately moved into Full Pledge Drive Alert, which means I spend much of my time going from demonstrating the Grundig emergency crank radio on the air, to taking credit card numbers over the phone, to clogging my arteries with free pledge room food. Oh, and editing news stories.

But fortunately, I took a few moments to examine the new phone book on my desk. Well, it was new a few months ago. But how often does anyone actually study the front cover of the phone book? It's yellow, and it has some light blue swirls on it. And, as it would happen, an advertising postcard glued to it, featuring this exciting picture: 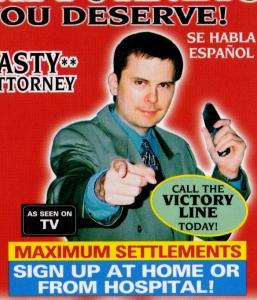 Yes, it's an ad for a firm billing itself as "The Car Accident Attorneys". What frightens me most isn't the fact that the guy's last name is "Hasty" (hey - hasty might be good if you're paying someone who bills by the hour). It isn't even the fact that he suggests calling from your hospital bed,or that he's "As Seen on TV". It's the picture. Specifically, what's in the guy's hand? Soap? An electric razor? A light saber? A bomb?

My guess is that it's a cell phone, but I'm more than a little puzzled as to what the dude is supposed to be doing, attorney-wise, while he's holding the phone away from his ear and pointing at the camera. One imagines the picture was taken in the airport, while he was in the standard alpha-male cell phone pose, demonstrating what an important guy he is that he needs to be barking orders into the phone while the rest of the schleps around him are merely reading John Grisham novels and watching features about Microsoft stock on the CNN airport network.

He'd like us to think that he's in front of Gate A5, answering calls from Spanish-speaking, hospital-bound clients. But of course, he's probably asking his secretary to look up the number for his styling mousse supplier, which will take a while, because she'll be distracted by the goofy postcard on the cover of the phone book.
Posted by Mitch Teich around 7:58 PM