Playing footie behind the scenes

Regular readers of this feature will recall the call I put out some weeks ago for someone to explain the concept of Australian Rules Football in advance of a story I was planning on an Australian Rules Football team's training camp in Flagstaff. Regular readers of this feature will also recall the lack of response that call generated.

No matter. I found a friendly Canadian couple who was crazy enough about the sport to drive eight hours up from San Diego to watch the team practice, and they were able to relate the objective of Australian Rules Football (a.k.a "Footie") to this reporter. Basically, if I understood correctly, this is how Footie works:

There are probably some other subtleties to the sport, but I no more grasped them from watching a practice than your average Burkina Faso resident (okay, I know the word is "Burkinabe", but I'm not sure that's common knowledge) would pick up the balk rule from a day at the Brewers spring training camp.

But there are plenty of other things I gleaned from spending some time with the Collingwood Magpies. The team has a pretty comprehensive website with lots of video from their two-week camp in Arizona, but most of it is actually related to the sport. Here is the other behind-the-scenes information that show like "Entertainment Tonight" and "ESPN Hollywood" would kill to find out, if anyone at either of those shows had ever heard of Australian Rules Football.

First, any game where you can knock the ball away from someone by jamming your knee into the back of his head shouldn't get a cute name like "Footie". 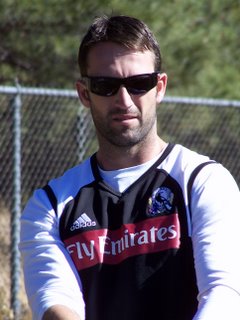 Speaking of cute, most of the Magpie players were roughly 6'3", 200 lbs., wore training uniforms that accentuated their athletic physique and sported Australian accents. Thus, it was difficult to interview women who were watching the practices, because the drool kept gumming up my minidisc recorder.

The team spent a full day at the Northern Arizona University "challenge course", which included team-building drills on the high ropes, but also more subtle (read: "weird") exercises, such as trying to form geometric shapes with a rope while blindfolded. The staff here in Public Radioland went through the same challenge course exercises a couple years ago, and the approach we took to geometry wasn't 1/10th as intellectual as this group of professional athletes. It's also difficult (but fun) to imagine the Chicago Bears discussing equilateral triangles while blindfolded.

Footie players sometimes dribble - basketball-style - the ball down the field. This is a more difficult skill than it looks. The Magpies' Chief of Staff gave me a few lessons, but more often than not, the ball bounced up and smacked me in the face.

On a related note, an Australian Rules Football hurts when it smacks you in the face.

I ran into a couple of the players at Barnes & Noble a few nights ago. The Arizona Cardinals trained in Flagstaff for six of the seven years I've lived here, and I don't remember running into any of them at Barnes & Noble.

Footie is unlikely to catch on in America, in large part because Americans are unlikely to willingly watch a game between teams called The Magpies and The Swans. On the other hand, Australians apparently can't relate to games between The Blue Jackets and The Canucks, and thus, ice hockey is less of a big deal there.

Most of these little factoids didn't make it into the final cut of my story, though. If you want to hear what did, it's available here, and on the KNAU Podcast.

Posted by Mitch Teich around 3:49 PM

I think I must have memory problems with my system. I had trouble getting the podcast to go past about 45 seconds. But that was a good 45 seconds! Best ever, baybee.

Funny. I can see why they "drooled".