Yes, it's November 1st, and time for that monthly dubious public service, the posting of my humor column from Northern Arizona's Mountain Living Magazine, the best free publication you can find in the foyers of health clubs in northern Arizona. It's an especially dubious public service this month, since my column is actually a repackaging of a posting to this very feature. Yes! Life imitates art! (Or more precisely: Life imitates "art"!) But to keep up the goodwill among the screaming and teeming masses gathered in front of 19 Minutes World Media Headquarters (we promise we'll come out for autographs soon), I'll add plenty of new material. Some, anyway.

Like many parents, hardly a week goes by when there's not cause to check the ubiquitous "What to Expect" series of books. During my wife's pregnancy, "What to Expect When You're Expecting" was the benchmark resource we'd consult to figure out things like: when my wife would want to eat anything besides KFC mashed potatoes, how goofy I should feel when I read a bedtime story to my wife's belly, etc.

We’re now up to "What to Expect: The Toddler Years", though since Sylvi's still pretty petite, I have a habit of sneaking a look back at the earlier books, as though they really should have been titled "What to Expect While Your Child's Still Less Than 20 Pounds".

But increasingly, I'm finding the majority of the issues my wife and I encounter are not actually in these books. [Note to jaded, experienced parents: Yeah, yeah. Shut up.] So I'm presenting the following addendum to the "What to Expect" series:

* * * * *
Problem: Daughter enters the City of Flagstaff's annual Halloween Costume Contest, dressed as (why not?) a ballpark vendor. Dad happens to be a "celebrity" judge, but figures this won't be a problem, since there's no chance a 16-month old beer (er, milk) vendor will win a costume contest. Of course, two of the other three judges rank her #1, and she ends up winning. 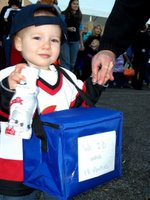 You'll probably: Cringe at another weird fact of life in a small city in Arizona.

Real solution: Cringe anyway, but spend the rest of the night assuring everyone you see that you recused yourself from the vote, despite the fact that a) it doesn't matter, and b) no one really cares. Go out of your way to compliment the other winners and then eat too many Pixi Stix for an adult human being.

You'll probably: Continue to ask child "What does a cow say?" in hopes that wearing a cow costume and knowing what a cow says will click in a moment of 16-month old synergy.

Real solution: Ask child what a dog says. When child obliges with and excited bark, explain to onlookers that child's costume is a "dog, dressed like a cow."

* * * * *
Problem: Child will ride in the shopping cart at the supermarket, but insists on holding onto some type of grocery at all times. Child would prefer to hold onto gallon jug of milk, but will deal with almost anything. Unfortunately, you're only there to buy pack of gum and bottle of mustard.

Real solution: Find unbreakable items in each aisle you visit. Hand her a 2-pound bag of rice, then a box of Cinnamon Raisin Oat Bran Lightly Frosted Total, then a spatula. Get to the cashier and say, "I decided I didn't want these, but I couldn't remember where I picked them up." They'll love you for this, since it'll give the bagging personnel something to do, rather than bagging your groceries in such a psychotic way that you return home with 800 items in one bag and one plum in another.

Problem: Child eats 7,000 pieces of watermelon, then pretends she doesn't want any more, though it turns out she'll continue to eat the watermelon, as long as you feed it to her.

You'll probably: Sigh heavily, mutter to yourself, then proceed to feed her the watermelon.

* * * * *
Problem: It's a rainy afternoon, so playing at the park is ruled out. So you take your 15-month old to the mall, figuring there's lots of room to run around. It turns out, of the 70 stores at the local mall, the only one she's interested in is Victoria's Secret. And no matter where you set her down in the mall, some bizarre, lingerie-related radar goes off in her little head, guiding her invariably back to Victoria's Secret, where she sets about removing all the wireless bras from a drawer. (It's hard to believe this one didn't make the "What to Expect" series.)

You'll probably: Sigh heavily, pick up your daughter, put the bras back in the drawer, and extricate the now-flailing toddler from the store, distracting her with the toy store next door.

Real solution: Sigh heavily, consider that you wouldn't have termed this a "problem" back in your college days, and be glad that you have another 14 or 15 years before you have to think of new excuses to keep your daughter out of Victoria's Secret.

* * * * *
Problem: After weeks of annoyingly inconsistent sleeping habits, your 14-month old daughter starts regularly sleeping for 13 or 14 hours a night.

You'll probably: Take her temperature, check on her every 15 minutes after 7:00 a.m., and wonder whether you should wake her up so that she's not eating breakfast at 11:30 am.

* * * * *
Problem: Your daughter wants to read the book "Hippos" 23 times in a row, despite the fact that it has no plot, and ends with the seemingly random line "Hippos can weigh over two tons!"

You'll probably: Read "Hippos" 23 times in a row. Then have a strange dream that you have nostrils on top of your head so that you can breathe while you're in the water.

Real solution: Page through "Hippos", but add your own lines about the Diamondbacks' lousy relief pitching ("Hippos think they need to stop leaving the ball over the plate with an 0-2 count..."). Do this now, because soon, your daughter will be able to debate you over the Diamondbacks’ use of relief pitchers.

* * * * *
Follow these real world solutions, and in no time, your child will grow into a well-adjusted teenager who won't be distracted from Victoria's Secret by a toy store. No, it'll take a cell phone store for that.
Posted by Mitch Teich around 12:56 AM