If Al Gore hadn't already disavowed his role in creating the Internet...

The aforementioned Lewis Black suggested that "if you want to know where we, as a society are - at this moment in time - you watch the Super Bowl at halftime."

But the Super Bowl only comes around once a year. Thank god. In the meantime, if you really want to know where we as a society are at any moment in time - I'd suggest checking out the search terms people are using to land on this very feature.

Some of them aren't surprising:

A lot of you, for example, are landing here while searching for pictures from the calendar featuring women curlers in various stages of undress. 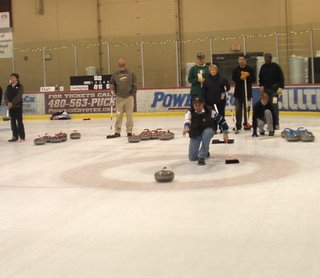 Alas, I have no pictures from the calendar to show you, but I'll happily post another picture of my own comical, yet fully clothed, attempts at curling. I wasn't at all surprised by these search engine hits, since I basically invited them in a recent post.

On the other hand, I was somewhat surprised at the people who reached this site while searching for naked pictures of Animal Planet host Jeff Corwin, a person whose name I invoked exactly once, and in reference to my own expedition at my local hospital. Some of our readers are going awfully deep into the results pages on Google.

From the Weird Coincidences Category, we've had a lot of visitors recently from web surfers who were interested in a recent mention of Hagerstown, Maryland on the TV sitcom, "My Name Is Earl". We didn't actually mention both concepts in a single post, but did mention each within a single week, which apparently made us almost unique on the Internet.

We've had some visitors who apparently confuse us with sites that provide actual, useful information. A lot of them were looking for some scientific information about the studies showing sauerkraut might prevent avian flu, though what they got were witty remarks at the expense of kimchi. And we've had a few people stop by, looking for solid information about defective window parts on Volkswagen Jettas. Instead, they got complaints about those window parts, which of course they already had before they got here.

There's an occasional Paris Hilton-related hit, thanks to one mention in a months-old post.

And there are a few hits that just make us happy - like the one who typed "learn thinks about arkitech" into Google. We can't actually remember who (or what) arkitech is or why we mentioned he/she/it, but we're especially happy that someone would attempt to "learn thinks" about he/she/it by visiting our humble feature.

And at long last, someone landed at the 19 Minutes Base Camp when they searched for Spudnik the Space Potato, who of course was the character who reminded us on 1980s-era Washington DC television that "you Earthlings should eat vegetables..." and that salad was, in fact, spelled "s-a-l-a-d".

As noted, this should give us a snapshot of where American culture is at the current moment. Curling, Jeff Corwin, Hagerstown, and arkitech. We have no idea.

And now, this Podcasting Update: The 19 Minutes World Media Headquarters has a pretty vast audio archive, some of it on reused audio tapes whose labels still read, "Farming America". We just ran across a 1996 interview with the Newfoundland rock/Celtic band Great Big Sea. Despite the fact that we were almost a decade less experienced when the interview took place, it struck us as interesting and entertaining enough that we've added it to our podcasting wing. The link for the podcast feed is here.
Posted by Mitch Teich around 11:40 PM

If Google search terms are the culture's snapshot, we are all in grave danger.

Our most frequent hits are for "Spongebob Sex" and "Disney Sex." And because I"m putting this in your comments, you might get some of the spillover hits.

I suppose women curlers in various stages of undress are better than women in curlers...