A few items of note, none of which really deserves its own individual blog entry – though the 19 Minutes staff is tempted to make multiple postings just to look more prolific.

I found out today that a colleague of mine – an editor with whom I’ve worked for close to a decade – was formerly an actual rock musician with an actual semi-successful band. Weird. It was like, well, finding out that an editor with whom you’ve worked for nearly a decade used to be a rock musician. (Great analogies are sometimes hard to come by.) Despite the band’s major-label release, I had to admit that I’d never heard anything by them. This isn’t surprising, since I tend to catch on to pop culture roughly four years after everyone else. The upside to this is that by the time I get into an album, the artist is just about to release another album. The downside to this is that by the time I get into a TV show, it’s about to be cancelled. (Although maybe that's actually another upside.)

Anyway, aside from envying the coolness of being part of the rock music industry, I have to admit I’m also a little jealous of the notion of having an interesting past life. I’ve been scanning the memory banks and auditioning potentially interesting past life ideas, just to get a jump on my memoirs. “’Jeopardy!’ contestant” is one possible concept, but it strikes me that a past life should last more than three days. “Mediocre middle relief pitcher on obscure college baseball team” might be a more substantial past life, but I don’t think it rises to the level of interesting cocktail party conversation. I’m open to suggestions, bearing in mind that it may take fiction to make me sound cool.

The Christian Science Monitor reported Wednesday that Toledo, Ohio is one of the most unwired cities in America; that is, it’s one of the best places for wireless internet access. Apparently, Toledans could be reading this very blog in any public library, at the airport, or even Fifth Third Field, the home of the Toledo Mud Hens baseball team. (Why they’d choose to be in an empty minor league ballpark in November is another story. Still another story is why anyone would name a ballpark "Fifth Third Field".)

Personally, I think the idea of people reading this fine feature in the airport is appealing, though even I’d have to cringe at the thought of having to reach across a guy surfing the net to buy a hotdog in the bleachers.

But it also brings to mind a curious commercial that the Verizon people have been running to publicize their wireless broadband coverage. They’re taking the unconventional tactic of suggesting that it’s no fun to surf the internet at a coffee shop – that coffee shops are somehow unpleasant places, at least if you don’t like coffee, or music, or comfortable chairs.

I’d posit that the opposite is probably the case – that you’d be hard-pressed to find a more comfortable place to surf the net. I’m enjoying typing this as I lie on my own couch, but I’d say the experience would be even better if someone else would bring me drinks as I write. The ballpark would be an okay place to surf the net, but aside from annoying actual baseball fans, you’d need a laptop that’s impervious to mustard and cheap beer. 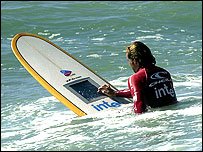 Of course, now the computer industry is now making computers that are impervious to huge waves, so I can’t foresee any problem with the anti-bratwurst packaging. The real question is, where do you find waves like these in Toledo?
BBC photo
Posted by Mitch Teich around 12:12 AM

Hate to disappoint you, but maybe in 25 years you'll be able to look back and think about an interesting past life. Following some of your stories and the stories behind them makes some people a little jealous. Not saying that being the manager of a grocery store isn't interesting, but somehow it lacks the pinache of being able to see Jesse Jackson on TV and say "quite a hugger that guy is".

Weren't you the original Barney?

How about "America's youngest presidential candidate?"

Or "I was half of the famous M&M in the Morning show"?

Or "I was once my own regional media conglomerate"?

See? Lots of things make your past interesting...