Lately, people have sought me out, guru-like, to comment on a couple of events that have taken place. These people seek my opinion and yet, rather than take the time to address them individually, I have invoked the blog rule. “Read my blog,” I tell them. It’s a pretty simple rule.

(True anecdote: A colleague here in Public Radioland was in my office Tuesday afternoon, brainstorming with me about questions to ask on two separate broadcast debates between candidates for Chairman and Vice-Chairman of the Hopi Tribe. “Ask them if they read my blog,” I suggested, helpfully. He thought I should phone that question in myself. Good thing the debates were on a different radio station.)

But as I said, a couple of things have transpired about which people think I should have an informed opinion. Or at least more informed than my opinion about the whole sauerkraut-avian flu thing.

“Good Night, and Good Luck” opened around the country last weekend. It’s a pretty stylish bio-pic about the 1953 showdown between legendary newsman Edward R. Murrow and Sen. Joseph McCarthy. (If you need more background than that, you’ll want to consult a website with more actual information.)

Murrow was one of the key reasons I got into journalism. More specifically, Murrow’s terrific reportage in “Harvest of Shame” inspired my career choice. My 8th grade science teacher, for reasons that are still a little hazy, showed us that documentary about the conditions Florida’s migrant workers were living in, and it’s an image that has always stayed with me, particularly as I produce or edit stories that could have an impact on people’s lives. (And also as I try to get news of the off-year elections this evening, only to find that CNN Headline News is leading with the latest non-update in the Natalee Holloway case, and CNN proper is running an interview with Jennifer Aniston.)

I’ve now seen “Good Night, and Good Luck” twice – the news department sponsored a field trip to see a matinee this afternoon and, while it’s not quite as inspiring as my first viewing of “Harvest of Shame”, it’s certainly cause for introspection for those of us in the news business. Specifically, it raises the question of who is maintaining Murrow’s legacy in broadcast journalism. While the Natalee Holloway and “Runaway Bride” stories are all-too-common in broadcast journalism today, there are plenty of noteworthy examples – many from here in Public Radioland – of journalism that strives to reach that Murrow ideal.

And it also leads one to think about CBS. The network has taken plenty of hits in recent years – the Dan Rather document controversy being among the most recent. But it’s worth noting that two of the more significant news-related movies in the past decade (“Good Night et al” and “The Insider”) chronicle the former Tiffany Network’s role in shaping history. Legendary journalists though they were, no one is making movies about Howard K. Smith and John Chancellor.

But of course, that wasn’t precisely the opinion people have sought from me. Here’s what they’re looking for: It’s a good movie. And the amount of weight George Clooney gained for his role as Fred Friendly was indeed impressive.

The other important development about which I have a vaguely informed opinion is, naturally, the calendar featuring women curlers in various stages of undress. I’m not what you would call a curling expert, but in Arizona, just knowing that curling is a winter sport makes you something of an authority.

I produced a story (which, coincidentally, won something called an Edward R. Murrow Award) last year about the only curling club in Arizona. I actually got to try the sport in the course of reporting the story, and I can assure you that all the members of the Coyotes Curling Club were fully clothed at all times while they were on the rink. I can also assure you that I won't be posing for any male version of the nude curling calendar. 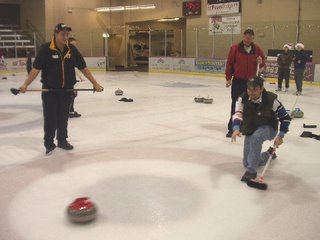 After an evening of straining roughly every muscle in my thighs and (let’s face it) non-existent rear end while curling, I can vouch for the fact that anyone who would curl at a serious, competitive level had better have some equally serious level of athleticism. But I can also vouch for the fact that at some point in time, the Fully Clothed Guys of the World did an amazing job of convincing the Athletic Women of the World that posing naked was somehow an empowering act, rather than what it actually is: Carrying on the legacy of another famous journalist. Hugh Hefner.

(But then again, the 19 Minutes staff would never get such a calendar for the pictures. We’d only read it for the dates.)
Posted by Mitch Teich around 12:34 AM

So it was Murrow and not Kermit the Frog who inspired you to go into journalism? And here I thought it was so you could wear a trenchcoat.