Why aren't there Pulitzers for random photos?

We were talking photography a little while ago here in the 19 Minutes World Media Headquarters - specifically, sports photography. For those of you who missed that conversation, and didn't bother to follow the convenient link above, I'll recap:

I've taken a lot of pictures of sporting events, for no particular reason, and with equipment that often doesn't quite fully capture the emotion of the event. For example, when I was a young person, I took a fair number of pictures of baseball games with a Kodak Instamatic camera, which did a fine job of taking pictures of the scoreboard, but - especially from the upper deck of Baltimore's Memorial Stadium, did less well at capturing diving catches or plays at the plate.

I ran across a lot of these pictures as I was preparing to move from Arizona to Wisconsin several months ago. Packing also allowed me to uncover an interesting contrast between my wife and me, picture-wise. Growing up, I took a lot of pictures of sporting events, mountains, ducks, cars, and people with Mohawk haircuts on London street corners. My wife took lots of pictures of friends. To this day, I can't remember whether I just didn't have any friends, whether I considered the ducks and the mohawk-wearers to be my friends, or I just didn't bother taking any pictures of them.

But at least all of my pictures (and my wife's) were of something - there was a clear subject and a purpose to the picture.

This is in stark contrast to one picture I also ran across. I know exactly where it was taken (the hallway in front of the gym entrance at John F. Kennedy High School, Silver Spring, Maryland). I know exactly when it was taken (March 25, 1987, and God alone knows why I know that). And I know the circumstances surrounding the activity in the picture (the District 1 concert band competition, which our high school was hosting, and which our jazz band was staffing). 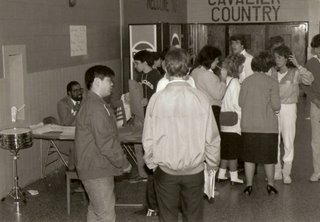 I'm the random guy in the middle, wearing the sweatshirt that says "Guides". (It was a Maine Guides minor league baseball team sweatshirt. I'm pretty sure I was the only guy at Kennedy High School with one of those.) My jazz instructor, Ron Kearns, is the smiling guy whom I'm just about to hand the envelope, or who just handed the envelope to me. I think, even, 18 years later, I can identify some of the other people in the picture (including a guy named "Doug", and my non-prom date from a previous post. I also think my ninth-grade biology teacher is in the picture, which doesn't make a great deal of sense, considering the context, but you never know.)

So the picture raises a number of interesting questions, which we'll handle in the order they occur to me as I wait for my 2-year old to wake up from her nap:

1. Who took this picture? Given that it's in black-and-white, it strikes me that it might have been a yearbook photographer. But wouldn't the yearbook have wanted pictures of the actual band competition, as opposed to random people milling around in the hallway outside the competition? I'm also not sure what the people from Abraham Zapruder High School were up to that day. Or

2. Why did this person take this picture? A question that we sort of dealt already. But we should also note that it's in focus, the lighting is decent, and no one's head appears cut off. So it's likely that it was at least taken intentionally.

3. Who (or what) was the subject of this picture? Granted, I'm sort of in the middle, but I'm not exactly doing anything interesting. Mr. Kearns is smiling, but not paying attention to the camera. So perhaps the photographer was tasked with capturing the magic of people milling around a high school hallway. Or perhaps he or she was hoping someone would write about the picture 18 years later.

4. How did I come into possession of this photo? Whoever developed the picture must have looked at the negative and - even realizing that it was a picture with no clear subject - went ahead and printed it, possibly only to pass it along to me. Which means I must have known the photographer, making the answer to Question #1 that much more mysterious.

So, to recap: We have here an 18-year-old picture that includes me, but features no particular subject nor any real artistic merit. And yet, I've held onto it for nearly two decades.

Why? My theory is that everyone of us has one of these pictures taken in our lifetimes - a picture that captures us in a context normally out of the realm of photography - and in doing so, actually gives us a glimpse of what we were like at that moment in our lives. (In my case, kind of doofy.)

But consider this picture of my paternal grandfather, taken on the streets of Havana, Cuba, in 1939. 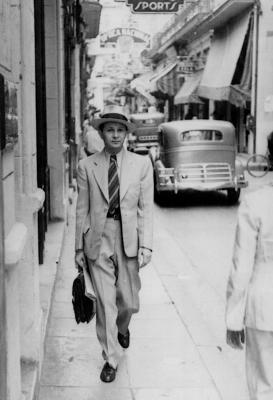 It differs a bit from "Kennedy High School Hallway" in that he was clearly the subject of the photo. Yet, the contextual questions remains: Why take a picture of a random guy walking down the street in Havana? And then, how do you get that picture to its subject? Do you stop him, midstride, and say, "Excuse me, random person walking down the street: I've just taken your picture. Would you like a copy of it, so future generations can write about it, 67 years from now?"

Or, maybe it was an automated sort of thing - the 1939 Havana equivalent of those cameras that automatically take pictures of people on the Flume Ride in the Wisconsin Dells.

I don't know. Maybe I should have taken the nap and let my two-year-old finish this post.

Posted by Mitch Teich around 8:00 PM

As always, I enjoy your random, self-deprecating sense of humor. However, I have to say my first reaction was "So that is what he looks like with hair!"

Yeah, that's the funny thing - had I known my hair would depart as early as it did, I would have spent more time combing it back in high school.