Taking a shot at sports photography

I’m going to a hockey game this evening. The Milwaukee Admirals are playing the Chicago Wolves – a game that, if it weren’t an actual minor-league match, would sound like a made-up event from an episode of MacGyver. (After which the players would kick back and take a swig out of a bottle labeled “Cola”, or perhaps “Beer”.)

But it’s a real game, and to prove it, I’m planning on bringing my camera. I’ve taken a lot of sports pictures in my life. I have no idea why. It was a habit that I thought began when started lugging my Nikon EM to Red Sox games when I was a teenager. But when we were packing things up to move to Wisconsin, I discovered a bunch of pictures from a Baltimore Orioles game in the late 70s (I’m assuming they were playing the Red Sox). They were taken from the upper deck of Memorial Stadium, using a Kodak Instamatic and its classic 126 film, which means you need a magnifying glass to verify that, the people in the 3X3" pictures are, in fact, baseball players.

The problem is – starting with the aforementioned Kodak Instamatic, I’ve never really had the right camera for shooting sports. I’ve had decent zoom lenses, but never the variety that allow for close-ups that convey any kind of emotion, the way a Sports Illustrated picture does. So what I’m left with are basically sports landscapes – nice shots of the ball in motion as the batter begins his swing, or of the football kicker just after he’s lofted the extra-point over the offensive line, or hockey players about to take a face-off. I get Lens Envy whenever I run into a professional photographer at games. 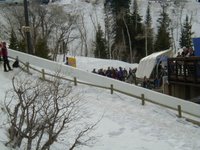 My wife and I made it to the 2002 Winter Olympics in Salt Lake City – an opportunity for us to practice our skills at shooting pictures of bobsledding. As it turns out, it was nearly impossible to take digital pictures of a bobsled roaring by at 85 mph, since our 2001 digital camera had a maddening delay between the time you pressed the shutter and the time the camera actually took the picture. So, until we got wise and went to the end of the run (where the bobsledders actually stopped), we got a lot of inspriring pictures of empty bobsled track. (Thrill of victory, indeed.) 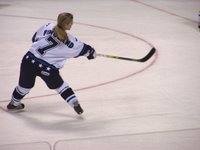 last weekend’s “Frozen Four Skills Challenge”, which showcased the talents of the best men’s and women’s college hockey players in the country. That’s because everything happens eight or nine times in a row – each competitor skates around the same cones, sprints around the same track, and shoots at the same goal. So after taking more pictures of empty ice, I could adjust my technique and gradually work my way to pictures of a skater’s heel, and finally on to the point where there was a real-live person in the frame. (The women hockey players – such as North Dakota’s Devon Fingland (above left) – who were a step or two slower than the men, were easier to capture.)

Anyway, I’ll probably take my camera to the Admirals game tonight. We’re in the upper deck, which will pose some challenges, even with my 2005 digital camera and its 10x optical zoom. So maybe I’ll see if I can dig out that old Kodak Instamatic.
Posted by Mitch Teich around 3:34 PM