When are we going to talk baseball?...Wait, isn't this the Mark Grace Show?

So, yeah. I was on "Nancy Grace" tonight, on CNN Headline News. (Really. You can read the transcript.)

Much to my surprise - and the surprise of my colleagues with TV experience - the producers didn't change topics 30 minutes before air, and I didn't get bumped from the show. The car that picked me up was on time, the local station from which I was uplinked was expecting me, and there were no technical difficulties once they patched me through to master control in New York. 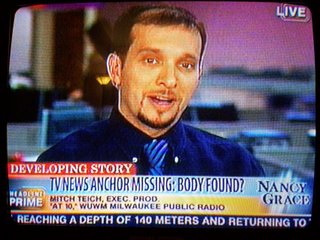 The surprising part was that I was basically on the show as the expert on the history of a missing person case that's more than a decade old - a case that I only really covered when it first broke. The fact that I covered it and that it happened so close to home has led me to follow developments more closely than most of the other stories I covered in 1995. (Whatever happened to that strike vote at the Hormel plant? Uh, next question.) But it's not like I've written a book on the case.

But hey - the more interesting part is about what the whole "Let's Appear on Nancy Grace" experience was like. For those of us in the public radio world (at least those of us not named "Cokie"), TV is a mysterious place, where you have to be careful about where you're looking when the camera is on, and they string mysterious wires down your shirt and up your back.

But I figured some of it would seem familiar, since - hey - I actually produce a daily talk show. Right off the bat, one major difference:

Mitch's talk show: Guests drive themselves to the station. If they remember to bring their parking stub in with them, we can validate it. Otherwise, tough noogies.

Nancy Grace show: Limousine picks up guests. Drives them to the studio. Driver waits, then drives them back again.

I got to the studio (in the newsroom at the Milwaukee NBC affiliate) around a half-hour before they needed me on the set, so I passed the time by perspiring freely and running to the bathroom roughly every 4 minutes. Also, since I hadn't expected to be on television when I left for work in the morning, I had run out and secured a new shirt for the occasion shortly before leaving for the studio. Of course, when I got there, I immediately got paranoid about whether the sleeves looked too long. I asked roughly every TV person I could find whether the shirt looked okay, and they all said it did, though - now that I think of it - none of them actually looked at the shirt when they said it.

So after 35 minutes, they moved me over to the set, which was a tall chair behind a podium, all on a riser slightly above the main level of the newsroom. This basically yielded the classic shot of the guest in front of what would have been a busy newsroom, had it not been 7:00 at night. Frankly, I had hoped for one of those city skyline backdrops, but I guess I'll have to do Larry King for that.

The local engineer wired me up with my earpiece, which for some reason is called an IFB, and connected the lavalliere microphone to my tie (also a new acquisition). I did the mic level check with a producer in New York, quickly ingratiating myself with her for doing more than just counting up to ten into her ear (I talked about Product 19, if I'm not mistaken). I continued to work on my new hobby of perspiring.

Ten minutes later, we checked mic levels again, by which point I had developed new material to say in lieu of counting ("You know, if I had known I was going to be on TV today, I would have been more attractive," and "If the camera adds 10 pounds, can the 10 pounds be mostly hair?"). The kind of stuff that was far more glib than anything I actually said on the air.

Actually, the show itself was fine. "Nancy Grace" feels a little different than a public radio talk show. For starters, the opening music was far more dramatic. ("You know, if I had known I was going to be on TV today, I would have worn my Darth Vader mask...") And throughout the show, little dramatic music stingers would come out of nowhere - presumably to illustrate something, though I was busy concentrating on not looking at the monitor, so as not to seem so shifty-eyed that a casual viewer would think I was a suspect.

I was the lead guest - which was fine, except that there was no real explanation for why a guy from Milwaukee Public Radio was talking about this case at all. We did some Q&A for a couple of minutes (or 3 hours, I'm not really sure), and I only bungled one part of the story. Then, she brought in another guest. And another. And several more. All of a sudden, she was interviewing a criminal case profiler. And one of Jodi Huisentruit's colleagues. And then a psychologist.

Stranger still, she introduced each one of them by saying something like "Let's go back to...", as though they had been guests on a special pre-show that the rest of us hadn't seen. As far as I could tell, I was the only guest she could go "back" to, and so every time she said "Let's go back to..." I would perk up, ready to answer a question, then exchange amused glances with the engineer. And go back to perspiring.

So she brought in something like seven guests over the next 20 minutes, and by 7:30, I figured I was done for the night. I was even feeling relatively dry, or at least less-damp. Then, all of a sudden, I was History Expert Dude again, and finally got to point out that I had been a reporter in southern Minnesota when the story initially broke.

The on-air highlight (aside from the commercials, I suppose) came when Nancy Grace asked me whether the local police had ever excavated any of the farm fields in the area after Huisentruit disappeared (particularly the one in the news today) - and if not, why not. I pointed out that since, essentially Mason City is located in the midst of roughly 46 billion farm fields, it would have been tough to dig up every single one of them.

"Mitch, Mitch, Mitch," she replied. "I'm a farm girl from Georgia - I know how rural farm country is." I have no idea whether she was agreeing with me, or trying to get me to say something else further, so I nodded broadly (a gesture I had decided would work well on TV) and went back to describing how rural northern Iowa is.

The whole segment lasted about 40 minutes, which is either impressive for TV, or a testament to how desperate cable outlets get when it comes to filling 24 hours a day with news. It also included a couple of phone callers, who also seemed to materialize from nowhere. But no one shouted, and even considering Nancy Grace's, um, brusque style, the whole thing stayed pretty civil. I'm not sure 40 minutes on Headline News brought investigators any closer to finding out what happened to Jodi Huisentruit. I hope it did.

And if nothing else, my limousine driver turned out to be a very nice retired botanist who had been featured in the Milwaukee Journal-Sentinel last year, and might make a good guest on another - more local - talk show.
Posted by Mitch Teich around 10:36 PM

The shirt looks fine... and I did look at it! Too bad dad still won't get cable, or I would have watched you!