Mitch’s note: On first blush, this is going to seem like another riff on prom season. It’s not, really. Unless you’re compiling a compendium of prom essays and wanting to pay exorbitant sums of money to reprint this. In that case, a prom season essay is exactly what this is. E-mail me, and I’ll tell you where to send the check.

The real-life radio program we produce at 19 Minutes World Media Headquarters ran an interview last Friday with the producer of an entertaining documentary called “The World’s Best Prom”. It’s about the combined prom the eight or nine high schools in Racine, Wisconsin, hold each year, and it tells the story through the experiences of a handful of students who were getting ready to attend the event in 1990.

It also features some archival footage of the joint prom’s early days – from the mid-1950s. And that footage brought to mind a question that’s gnawed at me for some time:

Why is it that teenagers from that era looked like adults (in fact, some of them look older than I do today, at age 37), while teenagers today look like, well, not adults. 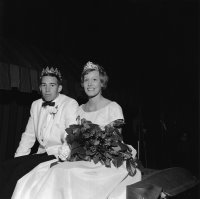 Take this picture from the 1963 Racine prom: The high schoolers aren’t about to start collecting their Social Security checks, but nor does the word “Whooooooooo!” appear to be emanating from their lips. The guy, in particular, seems to have a world-weariness that doesn’t seem in keeping with either prom season, or even the general culture that (I’m told) was the norm during the Kennedy/Camelot era.

High school seniors, as represented by this ill-advised picture of me taken in front of Independence Hall in Philadelphia, have become, well, doofuses. Somewhat innocent doofuses, but still, not quite the quasi-adults from the 1963 picture. In my defense, I’ll point out that the photographer and I had just run through a rainstorm. (I’m not sure there’s a defense for my fish tie.)

And yet, both the 1963 and 1987 photos attempt to convey some level of maturity (at least that’s the only legitimate explanation I can come up with for the fact that I was wearing a tie), which places them in something of a contrast with a recent prom picture I ran across from a high school in Ohio. I’m not certain, but I’m not sure “the verge of adulthood” is necessarily the image this picture’s subjects are trying to get across. What, exactly, the message might be, I can’t say for certain. (“MTV reality show viewing audience” might be a good start.)

But these things have a way of coming full-circle. Which is why I should start searching for cat’s eye glasses and an Audrey Hepburn dress for my daughter’s senior prom, scheduled for May of 2022.
Posted by Mitch Teich around 4:20 PM

If you still have the fish tie, I bet some of those MTV reality show high school seniors would incorporate it into their attire for their current proms by the look of the photo from Ohio.

I have to admit I still have a Warren Moon Vikings tie. Not as vintage as the fish tie, but would probably still have the same effect on people if worn today...

I actually own a Red Sox tie, replete with logos and generic ballplayers all over it. It was a gift from someone who knew of my fish tie collection (yes, there was more than one). But even I thought this one was way too ugly to wear. Why I still have it is, perhaps, a better question.