The International Olympic Committee has dropped baseball and softball from the Summer Games, beginning with the newly announced London games in 2012. As both a baseball pervert and supporter of women's sports, you'd imagine the 19 Minutes Management Team would be annoyed by this news. We're not.

- There are too many people on each team to make for compelling stories of the thrill of victory or the agony of defeat. I mean, it's easy to remember Paula Radcliffe's breakdown in the women's marathon in Athens, but who remembers the wild pitch committed by the pitcher for the Netherlands that gave up a crucial run to the Cuban team in the 4th inning of the second game of the preliminary round? Certainly not me, since I just made that example up.

- The best players from around the world (except maybe Cuba) are already playing in the United States. The Arizona Diamondbacks-Cincinnati Reds series this weekend could just as easily be an Olympic Games, only with better food and cheaper souvenirs. In contrast, there are still plenty of top-notch ice hockey players playing in other countries, so Olympic hockey retains some interest.

- It's not weird enough. Watching a relatively good baseball game between teams of people no one's heard of doesn't have the same cache as watching team handball, or field hockey, or water polo. Was the South Korea-Denmark women's team handball game a good one? Who knows? It sure was surreal to watch at 3:00 am, though.

[Pause as we shift back to the first person singular] 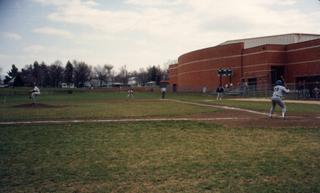 included giving up a hard ground ball to the third baseman, who promptly dropped the ball, kicked it, and then had to scramble to pick it up. He would have been charged with an error, except the batter had fallen down after hitting the ball, and so he was easily thrown out at first base.

It'd be okay if that sort of thing was limited to the Division III game -- the beer league of college athletics. But there was at least one NCAA playoff game I saw that featured 8 (count 'em, eight) errors by one team, bringing to mind the circumstances surrounding a home run my brother once hit in pee wee baseball that was facilitated by something like six wild throws around the field.

For those of you in the TV industry, though, while college baseball might not make terrific sports TV, pee wee baseball would make an excellent idea for a reality series.
Posted by Mitch Teich around 7:35 PM

Okay, I can believe that's you pitching, but where's the right fielder?

I can just make out the right fielder behind you, but the bigger question is where's the secondbaseman? This is quite a shift. Was this a slugger or a reaction to the pitcher's velocity? What was your fastball clocked at back in the light air of Iowa?

I think the fast ball clocked in around 70, or approximately Tim Wakefieldesque, prompting our coach to create a send-up of the Nolan Ryan Advil commercials that were running in those days: "When Mitch Teich throws 120 change-ups, even his arm gets tired..."