First, as you probably gathered, William Rehnquist only resigned from the Parallel Supreme Court in the parallel universe. And therefore, by sheer accident, my piece on the Arizona Doctor Crunch (which is a trend and not a new cereal from Kellogg's) actually ran as scheduled on NPR's Day to Day. The audio can be found here, and later of course at the Pulitzer Prize website (where it'll be found under the category "Best Marginally Interesting Radio Piece Under Three-and-a-half Minutes").

Meanwhile, the 19 Minutes staff this week flashed back to the evil phenomenon of back-to-school sales in early July, the point being there's nothing more demoralizing than being an 14-year old with a seemingly infinite vacation ahead of you, only to be confronted with great prices on graphing calculators when you go to the mall. (Oh yeah? What mall do you go to?)

Well, just to prove they can be as much of a party pooper as the next guy, the PR industry deposited this news release in the 19 Minutes inbox:

HOW TO SAVE ON BACK TO SCHOOL COSTS

in which we learn the following interesting piece of information:

and the following less interesting piece of information:

When preparing a back-to-school budget, start by taking a thorough inventory of what you already have and then develop a budget for what you still need.

and the following revolutionary piece of advice about buying back-to-school clothes:

Avoid being tempted to purchase a year's worth of clothing at one time, as children are expected to grow.

I, personally, expected to grow as well, though by the time I turned 16, I learned not to get my hopes up. Fortunately, that also means my back-to-school clothes from my junior year of high school still fit. If only I had kept that in mind back in the summer of 1985, I could have purchased clothes for the next 20 years.

Of course, as a Certified Guy, any clothes that still fit and have most of their major seams intact are fair game for my current wardrobe. I do still have (and occasionally wear) a few sweatshirts that date back at least to the late '80s, including one that originally belonged to my college roommate's sister, and which was won in a bet in 1988. (Foolishly, he thought I couldn't win an entire game of Trivial Pursuit in the last 20 minutes of an episode of "M*A*S*H". I think it was that episode where Hawkeye and Trapper play a prank on Major Burns...)

I'm wearing a shirt today known around the 19 Minutes household as my "Lucky Baseball Interview Shirt". 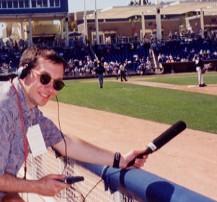 It doesn't date back nearly as far as much of my sweatshirt collection, but as I've worn in on roughly every interesting reporting assignment in the past five years, it's being held together largely by dried deodorant stains. Of course, as has been noted in this space before, in northern Arizona, you're actually viewed with some suspicion if your clothes appear too pressed.

So the pressure is on to replace the Lucky Baseball Interview Shirt. I'm resisting, though, since I'm still expecting to grow.
Posted by Mitch Teich around 2:00 PM

Mitch-
I sincerely appreciate the 14-year-old mall question. But, I'm only 14 for another month and a half. *sigh*
Sam

Nice radio piece! And thanks to Rehnquist for making it happen.