The 19 Minutes staff is once again confined to the classical music studio here in public radioland, filling in for three hours of "Cappricio Italien", "Pictures at an Exhibition", and "Goldberg Variations".

In fact, the only feedback I've gotten was from an appreciative listener -- who was glad I knew how to pronounce "linguini a la Bolognese" in an underwriting credit. I don't know, maybe our other announcers have been saying "linguini a la Bol-OG-knees" or something. Or perhaps they've been calling it "Freddy."

[Feedback update: The classical fans are apparently not all comatose this morning. A touching phone call from a very nice listener just came in, thanking us for the rousing version of Tchaikovsky's "Cappricio Italien", which brought her out of a funk this morning. I told her I'd be happy to take credit for it, but it was really the work of the New York Philharmonic and Leonard Bernstein.]

There are most likely some classical music announcers who spend the entire 15-20 minutes' duration of a piece of music thinking of what they'll say next. I'm not one of those announcers. (My "Cappricio Italien" back-announce: "The Cappricio Italien" by Tchaikovsky. A rousing piece of music, and a terrific opportunity to roll my "r's". Expect partly cloudy skies today...")

So while the music's on, the rest of us have the opportunity to catch up on the latest important developments in Korean baseball -- most sigificantly, the ruling by Koream baseball officials that players will no longer be able to store cabbage in their baseball caps. During games, anyway. 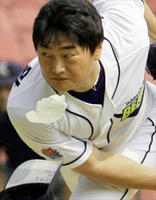 This development comes after a pitcher named Park Myung-hwan (nickname: "Coleslaw Myung-hwan") reportedly stashed frozen cabbage under his cap, presumably to keep cool, as he pitched for the Doosan Bears (actual team motto: "Hustle Doo!!"). The cabbage was discovered after Myung-hwan's cap fell off several times in the nationally televised game.

He was allowed to continue wearing the unusual cooling toupee for the rest of the game, since the Korean league's rules do not specifically address the wearing of leafy vegetables under one's baseball cap. But that is bound to change, as South Korea's Yonhap News Agency reports:

"What will we do if another team argues that because the cabbage leaf fell just as the pitcher was pitching, the batter got confused?" league rules committee chair Heo Koo-youn said.

Koo-youn does not say whether he thinks the batter would confuse the cabbage with the baseball, or whether the batter's confusion would come from trying to figure out whether it's cabbage, romaine lettuce, or bok choi falling from the pitcher's cap.

On the other hand, as American fans are grousing about ticket prices, player salaries, steroids, and the like, it's nice to see that at least one Korean team is living up to the promise it makes to fans on its website:

Now we Doosan Bears will show our fighting spirit on the green and win the victory. We promise to reward our fans with joy and excitement more than you expect.

Hard to argue with that. Especially since their fighting spirit itself seems to be green.

[And now, this late update: The BBC is now reporting that Korean players may still play ball with cabbage in their caps, provided they have a note from their doctor.]
Posted by Mitch Teich around 12:46 AM