Above the news fray

I try not to give my colleagues in the TV news world too hard a time just because they seriously care about whether Dayton residents feel the system of justice in Aruba is fair. They're already cursed by the fact that half the viewers are paying closer attention to what they're wearing, or their new hair style than the substance of what they're saying. And that often results in ridiculous displays, like the bizarre Today Show debate between Matt Lauer and Tom Cruise about ritalin, just so viewers actually pay some attention.

But in Public Radioland, where our reporters lovingly craft sound-rich feature stories often over the course of several weeks, we do cringe when we're lumped in with our TV brethren who consider a story that runs a minute-and-a-half to be an in-depth feature. We especially cringe when we're out on assignment and our interview subject asks, "Am I going to be on live TV?", as though we're carrying both an invisible video camera and an invisible satellite uplink with which to transmit it to the viewers of the world.

I've actually done some TV news work, blissfully without ever having to appear on camera. The first 19 Minutes headquarters was located in a pretty remote northeast Iowa locale. But news happened there regularly enough that the closest ABC affiliate, rather than have someone drive two hours to shoot video of a car crash aftermath, or a news conference at the Winneshiek County Extension Service, they supplied me with a video camera, microphone, and tripod. In fact, I would often cover the same events for an area newspaper, which meant that I could actually attend a news conference as my own media conglomerate.

The oddest part of this arrangement was actually getting the tape down to the TV station. The video camera, etc., was enough of a capital outlay that they weren't about to outfit my office with a satellite uplink, so the typical high-tech method of getting material to the mother ship involved dropping the tape off at the bus station. That meant that news could only happen until 11:00 -- when the bus left. On the off-chance that there was news that happened after 11:00 am, the only option was for the station to fly its news helicopter up to pick up the tape, which goes to show how in-demand a news helicopter was in Cedar Rapids, Iowa, in 1993. (That arrangement actually came to a temporary halt late that year when the station's helicopter pilot was summarily fired after being arrested for breaking into a bar to steal a neon beer sign. But I digress.)

That use of a helicopter, though, was at least more related to gathering actual news than the typical use we see in 19 Minutesland. We're currently in the three month annual period when helicopters consistently show their value in Arizona. The scope and intensity of wildfires is best (or, most safely) captured from the air.

The rest of the year, this is the typical helicopter-based story in Arizona:

NEWS COPTER 24: Well, as you can see, all is quiet now at this backyard swimming pool, but a few short hours ago, this was the scene of an all-to-familiar occurance here in the Valley...

God only knows what the stations spend to put a chopper in the air to beam down pictures of an empty swimming pool. Or how much they spend to provide us with aerial views of cars that have smashed into utility poles, which provide us the valuable public service of knowing what a '98 Civic looks like from above when its smashed into a utility pole. Back in Iowa, when it wasn't picking up videotapes, the news helicopter I worked with mainly got aerial views of fires in grain silos, which did a nice job of conveying how dangerous it was to be in a helicopter near a fire in a grain silo. 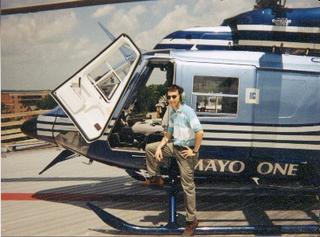 Here in Public Radioland, we're -- as always -- snobbishly superior, not bothering with such pedestrian pursuits as riding in helicopters. Except when one of our sources offers us a ride in a helicopter. Then it's pretty cool.
Posted by Mitch Teich around 4:53 PM