Things have been a little slow, posting-wise, around 19 Minutes World Media Headquarters in the last couple of weeks. Fortunately, our legions of fans have their thick binders full of back issues to dust off and go through. But as we looked though those back issues ourselves, we realized there are some updates to bring you.

For starters, there's a heartwarming coda to our prom story from this spring, which found its way into the "comments" section. Unfortunately, I bought my tuxedo roughly 13 years too late.

But more importantly, faithful readers of this column are no doubt wondering which Milwaukee area supermarket the 19 Minutes Purchasing Department chose to buy its Froot Loops.

Tragically, the home office is not located near any one of the Piggly Wigglys (Wigglies?) in the great Milwaukee area, so we have not been able to investigate their selection, or why the hell they would choose to name a supermarket "Piggly Wiggly".

Fortunately, there's a ready assortment of other shopping options within an easy drive. Here are the contenders:

There's Sentry Foods, which is another seemingly random name for a grocery store. But it's not just any Sentry Foods... it's something called "Metcalfe's Sentry", which I would assume (had I ever been to another one) has all the attraction of a regular Sentry, plus a spiffy Prepared Foods section (lest we go without California Rolls in Wauwatosa), a hefty-sized bakery, and a full liquor section (which isn't really that big a deal, given that we're talking about Wisconsin).

Nearby is something called Pick-n-Save, which combines all the appeal of a warehouse-style grocery store with the ambiance of a construction site. In all fairness, it actually is a construction site at the moment, as a former Walgreen's next door is ripped out and the grocery store expanded. People in the Sentry seem, on the whole, happier than people in the Pick-n-Save, but I've never stopped to ask them why.

People in both stores seem happier than the shoppers at Outpost Foods, a handsomely designed natural foods store across the street from the Pick-n-Save. This probably doesn't have anything to do with the nature of Outpost itself; rather, it has to do with the people who shop at such stores, who can't quite hide the fact that wheatgrass juice doesn't taste nearly as good as Dr Pepper. On the other hand, it is refreshing to be in Wisconsin, a state where one can get both organic bananas and cheese curds in the same store.

On the other side of town, we find Sendik's Market, which you know will be more expensive than the other stores the moment you walk in and see they're selling Sendik's logowear. (I may be wrong, but I don't remember seeing logowear for sale at the Secret Safeway in Tenleytown.) The stuff is good and occasionally you run into something like two dozen eggs for 99 cents, but in the 19 Minutes Staff's estimation, there's a limited need to pay $4.00 for Chips Ahoy (for instance, you're in Bulgaria). On the upside, Sendik's has, hands-down, the nicest plastic grocery bags ever made. And their logo is pretty spiffy.

Of course, the Wauwatosa Sendik's is apparently not related to something called the Elmbrook Sendik's , which has prices more in line with the Sentry and the Pick-n-Save, and whose plastic bags are swell, but not in the same league as the Wauwatosa Sendik's. Plus, no logowear. But the best selection of frozen pizza of any of the Tosa stores. Despite being called "Elmbrook", it's actually in Brookfield, across the street from the Wauwatosa line. I have no idea how either of these stores relate to yet another Sendik's incarnation, also in Brookfield.

All of these stores (except, maybe, Outpost) sell Product 19, which places them ahead of all the supermarkets in Flagstaff.

So the 19 Minutes staff does its shopping at... whatever store has the best deal on yogurt on any given day. Our two-year-old eats a lot of yogurt.

And finally, there's no real update on the annoying Erin Crocker racing story, which is to say that there's still no story. However, we just went though our pictures from the 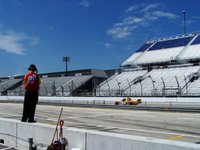 18-hour Crocker watch at the Milwaukee Mile over the weekend, and we thought this one worked out especially well, because it's a good indication of how close I came to getting the interview. Not very.