What's the penalty for improper use of fabric softener?

It's been pointed out that in my most recent post to this feature, I made the wrong observation about the ticket stub I discovered in the windbreaker I was wearing the other day. I thought it was vaguely interesting that I was wearing a jacket that first graced my hall closet 13 years ago.

A more careful reader of this column(thanks, Mom) thought it was more interesting that I apparently haven't washed the windbreaker in question in more than a decade.

It is a bit frightening that it may, in fact, be the case that this jacket hasn't seen a washing machine since it inadvertently left the equipment stash of the Cornell College track team. (I, of course, was never a member of any track team - several of the jackets made their way to the baseball team's bullpen on a particularly chilly night.)

On the other hand, I am just strange enough that I can easily envision a scenario in which I removed all the contents of the jacket pockets, washed the jacket, then duly returned the contents to the original locale, figuring Hey, I might need something to look at while I'm in line for a movie.

If that was, in fact, the case, it means this other vintage artifact has been in and out of my pocket a few times. 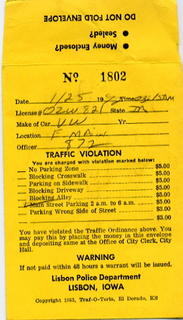 Officer 872 of the Lisbon (Iowa) Police Department apparently issued me this ticket at 3:15 one January morning in 1992.

And it elicits a few more vaguely interesting observations:

First, it leads one to wonder how the City of Lisbon determines police officer badge numbers. With a population in those days that hovered around 1,000, it seems unlikely there were 872 officers on the force. On the other hand, having Badge #3 would seem pretty podunk. Also, what must Officer #872 have done to tick off his superiors that led him to be on duty in Lisbon, Iowa at 3:15 a.m.?

Second, the bottom of the ticket notes that as of 1992, the City of Lisbon's tickets were, in fact, Copyright 1953. I imagine the $5.00 fine for parking on Main Street between 2:00 and 6:00 am was a stronger slap on the wrist in the '50s. "Traf-O-Teria" does still seem to exist as a unit of something called Butler County Printing. It would also be a good name for a parking-themed restaurant. So would "Yellow Curb Bistro".

Finally, the 19 Minutes staff would like to note that the $5.00 fine was due to be paid within 48 hours, which seems a mite harsh. It also means that the fine is either 4,994 days late, in which case a warrant on the 19 Minutes staff has been out for more than a decade -- or, I paid the fine 13 years ago, but hung onto the ticket just in case a good use for it ever came along, such as the thentofore not-yet-invented weblog concept.

And it's 19 miunutes past the hour.
Posted by Mitch Teich around 7:19 PM