Wherever you shower, there you are

Careful readers of this feature have probably already figured out that I'm a geography geek. A map geek, really. That would explain why I would decide to learn my state capitals from the information on the sides of chocolate milk cartons in 4th or 5th grade. Though my school changed milk suppliers halfway through my 5th grade year, and to this day, I still get Charleston, West Virginia confused with Charles Town, West Virginia. I think Charleston's the capital. Maybe it's Wheeling.

My affinity for maps was apparently well-known enough that I hauled in three world atlases for my bar mitzvah back in 1982. One of them is a somewhat inscrutable British publication called "The Library Atlas", whose index conveniently directs you to places around the globe by giving their latitude and longitude, rather than - say - the page number. So naturally I still have that one on my shelf, 23 years later. (Hey, the country borders may have changed, but save for plate techtonics, the latitude and longitude are still pretty much the same.)

My senior year of college (okay, one of my senior years of college), I kept a Rand McNally Road Atlas in the bathroom of my apartment. Unlike "The Library Atlas", I no longer own that particular volume. 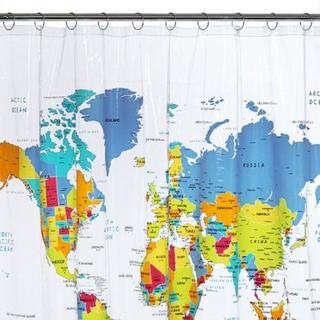 And that's why the latest addition to my current bathroom was so exciting - a Map of the World Shower Curtain, courtesy of the Target Corporation. (Well, not so much "courtesy of", as "courtesy of paying Target $9.99.")

Aside from the fact that it helps me achieve the lifelong ambition of having a scale in my bathroom that's measured in miles instead of pounds, it's a perfect fit, since it manages to exceed "The Library Atlas" in terms of weirdness.

I had hoped for a refresher on state capitals since my chocolate milk days, but this shower curtain includes only one city in the 48 contiguous U.S. states - Washington, D.C. On the bright side, the shower curtain allows me to catch up on my knowledge of Random Cities in British Columbia, as it features not only Vancouver, but Bear Lake, Prince George, and of course Kamloops. I can also brush up on my Cities That Sound Similar to Kamloops, But Are In Australia, such as Kalgoorlie. Of course, the map leaves out Melbourne, but that's a small price to pay ($9.99).

And while I'm picking up the bottle of shampoo, I can also study all of South Africa's capitals, including my favorite, the judicial capital, Bloemfontein. (Alas, the map is not detailed enough to include the Jubileum Building, which we learn from the city website was "Constructed in the 1920s as a venue for reading and refreshments for young people.")

Other highlights of this terrific shower curtain include Cities that Sound Like Brands of Bottled Water or Vodka (Vaasa, Finland), Cities Previously Known Only to Players of the Board Game "Risk" (Petropavlosk-Kamchatskij, Siberia), and Cities Where Wiley Post and Will Rogers Died (Barrow, Alaska).

Frankly, the only real drawback to this shower curtain is that I most frequently encounter it before I've fully awakened in the morning, which means map details occasionally worm their way into my psyche without my realizing it (Me: "Want to go get coffee?" My coworker: "Sure, where?" Me: "Turkmenistan.").

But in all, I highly recommend it for anyone you know who is both a map geek and takes showers. Also, it's more waterproof than the road atlas.
Posted by Mitch Teich around 12:22 AM