Here at the radio show I produce at 19 Minutes World Media Headquarters, one of my first tasks after I came on board - before I was even getting paid - was to help hire an arts producer. I undertook this for several reasons - first among them, because the station sought to enhance the arts content of the program. But more importantly, it was because I was afraid that if we didn't hire an arts producer, I would be forced to do most of our arts interviews.

I have nothing against the Arts (with a capital "A"). In fact, arts coverage is one of the areas that makes our program stand out. In the past, I've been only too happy to attempt to correctly pronounce the names of classical composers on the radio. The thing was, most of the composers weren't alive enough - and none of them was in the studio - to correct me.

Here in Milwaukee, our interviews go on at some length, giving people with an ample arts background plenty of time (and, potentially plenty of ammunition) to expose me when I'm in over my head.

So we hired this arts producer. And she does a terrific job, what with her background in being able to pronounce the names of foreign composers, and painters, and other people with more artistic talent than me. Alas, she took the job with some expectation of being able to go on vacation. Which she did last week, leaving me in the position of interviewing actual people who knew what they were talking about. This worried me somewhat.

I've never had a great deal of aptitude for fine art. Not that I don't appreciate it. (As a matter of fact, one of the art interviews I conducted last week was with a photographer whose work actually caught my eye enough that I pursued the interview myself.)

But my problem is in figuring out the vernacular with which to ask intelligent questions. I've never been able to use terms like "dynamic of form" in a sentence the way art critics do. (In fact, I'm not entirely sure what a term like "dynamic of form" even means.) The problem was that my early exposure to art consisted of half a dozen middle school field trips to the Smithsonian's Hirshhorn Museum, where the tour guide would speak to half a dozen enraptured future artists about abstract sculpture and 47 antsy non-future-artists who were anxious to go eat freeze-dried ice cream at the Air and Space Museum. ("Hey! It tastes like ice cream, but it feels like styrofoam! Cool!")

So years later, I know that a painting like this: 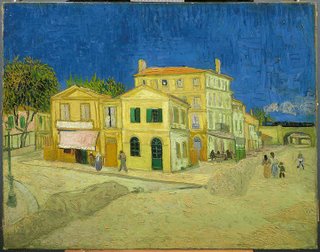 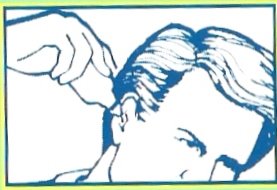 But I'm hard-pressed to explain exactly why.

I did, however, learn enough from my middle school field trips to know that Vincent Van Gogh, who painted the former picture, would be jealous of the guy in the latter picture.
Posted by Mitch Teich around 4:46 PM