Put down the duckie

You'd think I might learn at some point. Before Monday night, I'd eaten duck four times in memory. (I may have eaten duck baby food as a child, but somehow, I doubt it.) Each one of those four times, I was sick to my stomach, or very close to it.

After it happened twice, I was still willing to chalk it up to coincidence. The first two occurrences both happened after eating in the same restaurant in Washington, DC's Chinatown. So, I mean, hey, there's nothing that says I wasn't actually allergic to egg rolls, right?

I went about 5 years before trying duck again. This time it was in an unfamiliar restaurant in Ottawa. But both the taste and the results were strikingly similar, leading to an enjoyable drive back to Potsdam, New York that night, which was marked by fun-filled stops along Highway 416 in such hotspots as Kemptville (which became decidedly less kempt) and Spencerville, Ontario.

Still, the optimist in me decided to give duck another go a couple years ago in San Diego. I didn't feel great afterwards, but survived unscathed.

Emboldened, I set out for the home of our only local relatives to ring in Chanukah on Monday. They were serving something called "Turducken", which apparently is a turkey stuffed with duck, chicken, and - in this case - sausage. As a vegetarian colleague of mine noted, "That's like having meat with a side of meat, another side of meat, and then meat for dessert!"

(Never mind for the moment that we were about to celebrate a Jewish holiday with a meal that included sausage. For more on this theme, check out Andy Borowitz's column in Sunday's New York Times, in which he describes celebrating Yom Kippur by going to a Swedish smorgasbord restaurant.)

So, of course, the duck part of the Turducken came back to haunt me Monday night, though unlike the Chanukah miracle, the after-effects lasted considerably less than eight days.

What I can't figure out is why I would want to eat a duck in the first place? Ducks are cool birds. 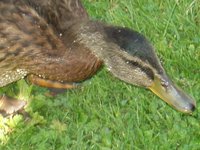 As my wife can attest, I've wasted no small amount of bandwidth on a variety of digital cameras capturing ducks in their natural habitat (at a museum in Sweden, in Bank One Ballpark, etc.). I read "Make Way for Ducklings" to our daughter dozens of times before she was born. Really. I owned three rubber ducks before she was born, too.

So in a first for this space, I hearby make the following New Year's resolution: No more eating ducks. Although maybe I'd have more luck with the rubber ducks...
Posted by Mitch Teich around 1:33 PM